"No Smell, No Service" - A Monopoly's Business Rule 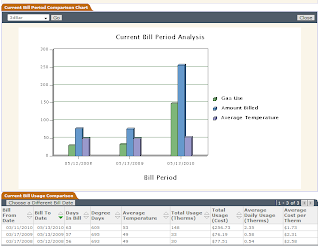 A routine inspection of a natural gas invoice ("bill") turned up an obvious problem, as shown in the chart supplied by the local monopoly. The meter reader could have made a mistake, or . . . Come to think of it, we had replaced a broken water pipe in the yard recently. Perhaps there had been damage to a nearby gas line?

I reached the call center after hours on the "emergency" line. There was no other line to call after hours, although the invoice stated that 24/7 service was available.

When the problem was explained, before I could finish, the CSR interrupted me, saying that none of the usage history information I was reading aloud would be of interest. "This is a billing issue, sir.  Billing, billing, billing."

I explained about the recent digging.

"Billing. You'll have to call back tomorrow during office hours."

I asked for a supervisor. The CSR at first refused to put a supervisor on, then finally said one would call back.
In 30 minutes I had the identical conversation with another CSR.

"No smell, no service, sir. This is a billing issue."

I explained that we have been customer since '92, and never had a problem until speaking to her and her colleague. I also pointed out that we were considering a switch to natural gas from heating oil, but wouldn't if this was the service we could receive from the Company. (A switch would be worth thousands of dollars in additional gross revenue per year to the Company.) 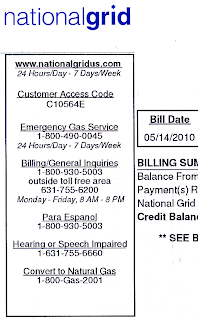 The next day I waited ten minutes for Billing, only to be transferred to a "Consumption Analyst."  One was not available, so the CSR simply scheduled to have the meter re-read. That was the end of any interactions with the Company by phone. At some point an inspector was sent, a credit was issued, but no one said anything further to use, either in writing or by phone.

Except for mailed solicitations for me to switch to natural gas for heat.

This is a Flickr badge showing items in a set called errorprocessing. Make your own badge here.